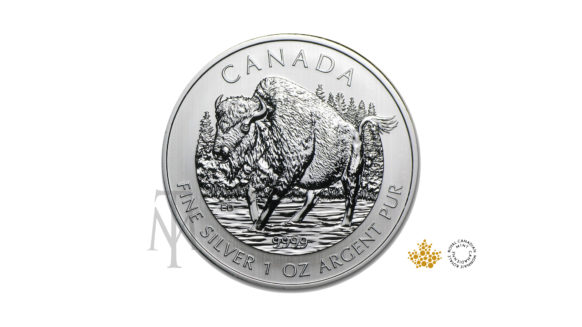 Wood bison are known for their wooly coats, horns, large heads and large size with males weighing over 900 kilograms (2,000 pounds). Once numbered to several hundred thousand, Canadian Wood bison were nearly extinct by the early 1900’s as a result of over hunting and human encroachment. Conservation efforts are credited in reviving their population with more than 10,000 now in the wild.

This sixth and final coin in the Royal Canadian Mint’s Wildlife Series features the wood bison. Each Wildlife Series coin is limited to a mintage of 1 million coins, which adds to their appeal and collectibility. Canadian artist Emily Damstra designed the coin’s reverse image of the Wood bison in its native woodland habitat. Inscriptions include CANADA, 9999, FINE SILVER 1 OZ ARGENT PUR and Damstra’s initials of ED.

Obverse: Displays the right-facing profile of Her Majesty Queen Elizabeth II, along with the year and face value.
Reverse: Features Emily S. Damstra’s design of a wood bison galloping through the snow.