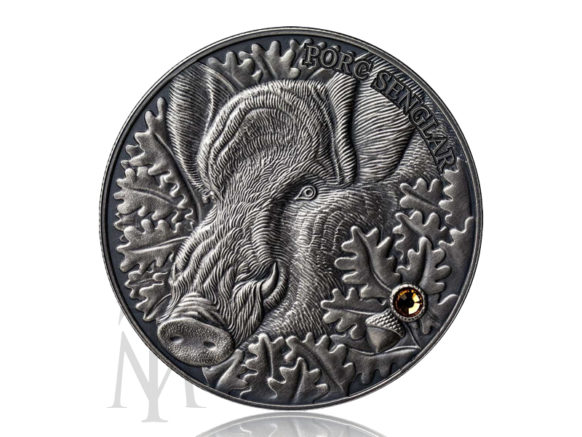 The large collection starts with the set featuring European animals. Presented in a luxury box, the “Atlas of Wildlife: Europe” consists of four coins in total – Wild Boar, Perch, Pond Turtle and Wood Grouse – to be released soon in 2014. The complete collection will comprise 6 sets – one per year, each dedicated to a certain part of the world: Europe, North America, South America, Australia, Africa and Asia. Together with antique finish, the superb quality of minting and a stylized book-shaped box make these silver pieces simply amazing!

The Wild Boar or wild pig (Sus scrofa) is a species of the pig genus Sus, part of the biological family Suidae. The species includes many subspecies. It is the wild ancestor of the domestic pig, an animal with which it freely hybridises. Wild boar are native across much of Northern and Central Europe, the Mediterranean region (including North Africa’s Atlas Mountains) and much of Asia, including Japan and as far south as Indonesia. Populations have also been artificially introduced in some parts of the world, most notably the Americas and Australasia, where they are regarded as both an important food resource and an environmental threat. Elsewhere, such as England, populations have reestablished themselves after escapes of wild boar from captivity in areas where they had previously been extirpated.