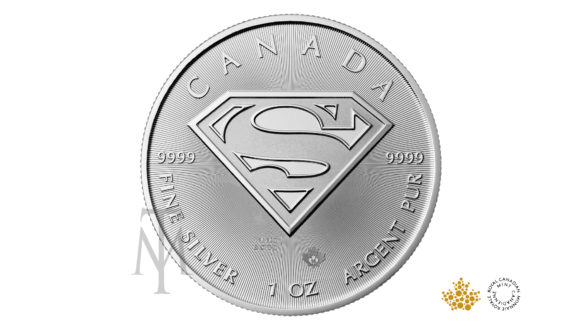 The Royal Canadian Mint has led the way in 2016 with a variety of superhero-themed coins, this incredible Silver Superman bullion coin featuring one of the most iconic symbols of all time, the S-Shield of Superman.

Since his first appearance in 1938, millions of readers and movie-goers have been captivated by the adventures of Clark Kent and his secret identity as Superman. As the infant Kal-El, he was rocketed to Earth from the doomed Planet Krypton and was discovered by Jonathan and Martha Kent, who raised him as their son. They instilled in him the strong values and beliefs that compel him to use his superhuman abilities for the greater good.

Just as Superman has become a powerful symbol of valor and strength, so too has the iconic S-Shield that is emblazoned across his chest. It is one of the most recognized symbols in the world, and is a universal icon that has the ability to stir the imagination, to inspire and to give hope for truth and justice in a timeless way that transcends language and culture.

The obverse side of the 2016 1 oz Canadian Superman Shield coin includes the right-profile portrait of Queen Elizabeth II, as created in 2003 by Susanna Blunt. Security features such as the precision radial line pattern, and the micro engraved textured maple leaf all combine to offer peace of mind to the secure investor.