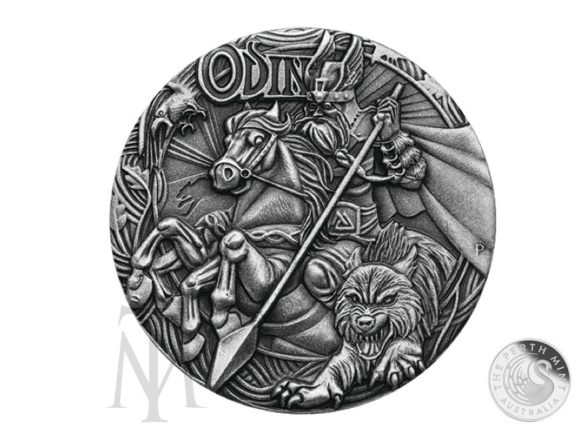 The first release in this exciting new Norse Gods series

According to ancient Norse mythology, Odin was the king of Asgard. He had a tendency to disguise himself and is often depicted wearing a mask, a long hat, and a green coat. He is known as the king of the gods as well as the god of war and death, a sky god, and the god of wisdom and poetry.

The reverse of the coin depicts the almighty Odin wielding his spear and riding his horse Sleipnir. He is accompanied by his wolves and his ravens. The design also includes the inscription ODIN, and The Perth Mint’s traditional ‘P’ mintmark.

To capture the depth and detail of the design, the coin is struck in high relief to a rimless format and features an antique finish.
Issued as legal tender under the authority of the Government of Tuvalu, the Ian Rank-Broadley effigy of Her Majesty Queen Elizabeth II, the 2016 year-date, and the monetary denomination, are shown on the coin’s obverse.

The coin is housed in a prestigious square wooden display case with stunning engraved detail on its lid, and packaged in a themed shipper. The coin is accompanied by a numbered Certificate of Authenticity.