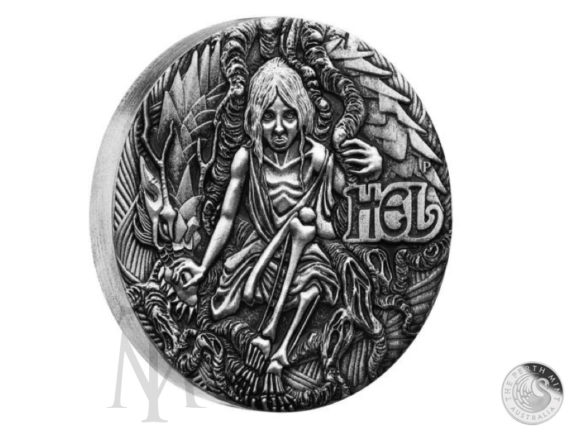 The third and final coin in the new Norse Goddesses series features Hel, the goddess of the dead and the queen of the underworld. The gods predicted terrible forebodings about the destiny of Hel and her two siblings, Fenrir the wolf and Jormungand the serpent. As a result Hel was banished to the netherworld by Odin, the king of Asgard, out of fear of what she might become. In the netherworld she was responsible for the fate of all those who died from sickness and old age, and those souls who did not die in battle.

The reverse of the coin depicts Hel sitting cross-legged underneath the first World Tree with Nidhug wrapped around the base of the tree. Some of the tree roots depict faces of the lost souls she watches over. The inscription HEL and The Perth Mint’s traditional ‘P’ mintmark also feature in the design.

To capture the depth and detail of the design, the coin is struck in high relief to a rimless format, and has been individually ‘antiqued’ to give it a unique finish conveying the surface abrasions of an ancient artefact. As a result of this treatment, the appearance of each coin may vary.

Issued as legal tender under the authority of the Government of Tuvalu, the coin’s obverse depicts the Ian Rank-Broadley effigy of Her Majesty Queen Elizabeth II, the 2017 year-date and the monetary denomination.

The Perth Mint will release no more than 2,000 of the Norse Goddesses – Hel 2017 2oz Silver Antiqued High Relief Coin.

The coin is housed in a prestigious square wooden display case with stunning engraved detail on its lid. The coin is accompanied by a numbered Certificate of Authenticity and packaged in a themed shipper.