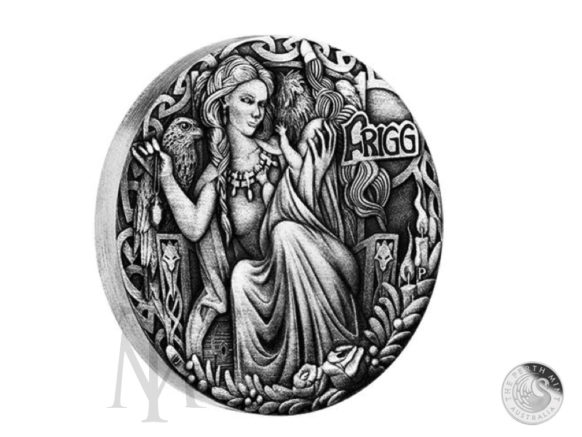 The second coin in the exciting Norse Goddesses series features Frigg. According to ancient Norse mythology, Frigg was the goddess of love, marriage, destiny, the sky and weaving. She is said to have weaved the clouds to control the weather, and the threads of fate to determine the destiny of men and gods alike. She is considered the protector of birthing women and was called upon by those who were dying, to help them transition to the after-life.

The reverse of the coin depicts Frigg sitting on Odin’s high seat cradling a newborn baby in one arm and holding a rose quartz pendant in the other. Also featured is a falcon, white candles and woven threads. The inscription FRIGG and The Perth Mint’s traditional ‘P’ mintmark also feature in the design.

To capture the depth and detail of the design, the coin is struck in high relief to a rimless format, and has been individually ‘antiqued’ to give it a unique finish conveying the surface abrasions of an ancient artefact. As a result of this treatment, the appearance of each coin may vary.

Issued as legal tender under the authority of the Government of Tuvalu, the coin’s obverse depicts the Ian Rank-Broadley effigy of Her Majesty Queen Elizabeth II, the 2017 year-date and the monetary denomination.

The Perth Mint will release no more than 2,000 of the Norse Goddesses – Frigg 2017 2oz Silver Antiqued High Relief Coin.

The coin is housed in a prestigious wooden display case with stunning engraved detail on its lid. The coin is accompanied by a numbered Certificate of Authenticity and packaged in a themed shipper.