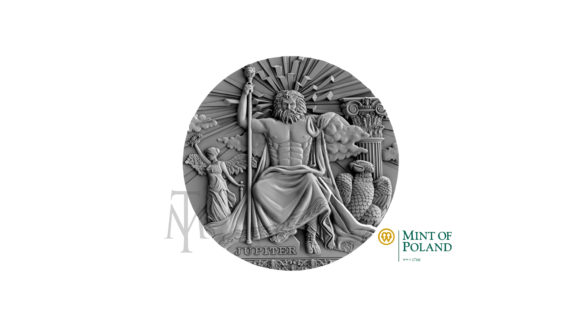 The first release of the stunning new Roman Gods series features Jupiter, the King Of Gods.

Struck from 2oz of 99.9% pure silver, this unique release is limited to only 500 coins worldwide.

Jupiter, also Jove, is the god of sky and thunder and king of the gods in Ancient Roman religion and mythology. Jupiter was the chief deity of Roman state religion throughout the Republican and Imperial eras, until Christianity became the dominant religion of the Empire. In Roman mythology, he negotiates with Numa Pompilius, the second king of Rome, to establish principles of Roman religion such as offering, or sacrifice.

The Romans regarded Jupiter as the equivalent of the Greek Zeus, and in Latin literature and Roman art, the myths and iconography of Zeus are adapted under the name Iuppiter.

The serial number is engraved on each coin.

The coin is accompanied by a stunning illustrated shipper and a numbered Certificate of Authenticity.