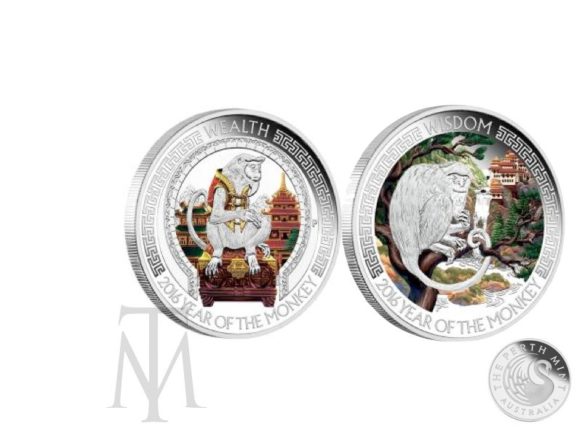 In 2016 we celebrate the monkey, the ninth animal of the 12-year cycle of the Chinese zodiac.

Both coins are struck from 1oz of 99.9% pure silver in proof quality.

The wealth coin’s reverse depicts a representation of a monkey dressed in a silk waistcoat and sitting on a treasure chest, in front of a palace, signifying wealth and prosperity. The inscriptions WEALTH and 2016 YEAR OF THE MONKEY also appear in the design with The Perth Mint’s traditional ‘P’ mintmark.

The wisdom coin’s reverse depicts a representation of an older monkey sitting in a tree on the banks of a waterfall, beside a temple, signifying age and wisdom. The inscriptions WISDOM and 2016 YEAR OF THE MONKEY also appear in the design with The Perth Mint’s traditional ‘P’ mintmark.

Issued as legal tender under the authority of the Government of Tuvalu, the Ian Rank-Broadley effigy of Her Majesty Queen Elizabeth II, the 2016 year-date, and the monetary denomination are shown on each coin’s obverse.