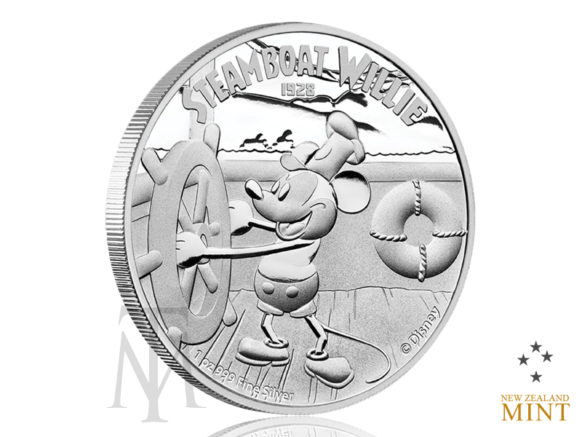 Through the decades since its release, Steamboat Willie has received widespread acclaim for introducing one of the world’s most popular cartoon characters, and for its innovation. The film is notable for being the first cartoon with synchronized sound and the first to feature a post-produced soundtrack. The film also featured Walt Disney himself as Mickey.

In 1994, Steamboat Willie was voted the thirteenth greatest cartoon of all time and selected for preservation in the United States National Film Registry 1998, being deemed culturally, historically, and aesthetically significant.

The Disney – Steamboat Willie gold and silver coins are the first in a two-year program of regular releases featuring Disney’s most loved characters.

Each magical release portrays a scene from Disney’s Steamboat Willie – an animated film released in New York on 18 November 1928 which received widespread acclaim for its innovation and debut of Mickey Mouse.

Each coin is meticulously struck from 1oz of 99.9% pure silver in superb proof quality.

The coin’s reverse features a sculptured representation of Mickey Mouse at the wheel of his handcrafted ship.  The inscription STEAMBOAT WILLIE 1928 completes the design.

Issued by New Zealand Mint as legal tender of the South Pacific island nation of Niue, the coin’s obverse depicts the Ian Rank-Broadley effigy of Her Majesty Queen Elizabeth II, the 2014 year-date and the monetary denomination.

Under official license of Disney, each silver proof coin is issued by New Zealand Mint.

No more than 10,000 of these Disney – Steamboat Willie 2014 1oz Silver Proof Coins will be made available worldwide.

Displayed in a classic wooden presentation case, each coin is delivered in a coloured, vintage-style shipper featuring an image of Mickey Mouse.

Each release is accompanied by a numbered Certificate of Authenticity.