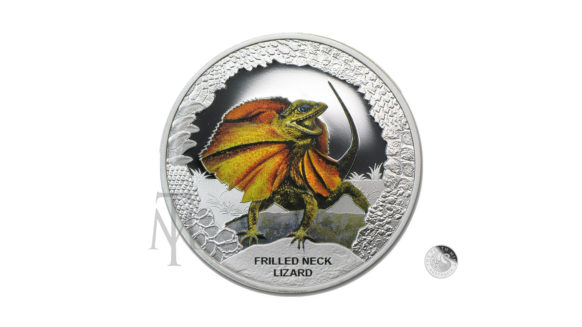 The first coin from this remarkable series features the iconic Frilled Neck Lizard. When this unique creature feels threatened, it extends the frill around its neck like an open umbrella. Frilled Neck Lizards are members of the dragon family that live in the tropical and warm temperate forests and woodlands of northern Australia. They spend most of their lives in the trees, but descend occasionally to feed on ants and small lizards.

The coin’s reverse portrays a coloured Frilled Neck Lizard in defence mode, bordered by a montage of exotic reptile skin patterns. The design also incorporates the inscription FRILLED NECK LIZARD. Issued as legal tender under the authority of the Government of Tuvalu, the obverse of the coin depicts the Ian Rank-Broadley effigy of Her Majesty Queen Elizabeth II, the monetary denomination and the 2013 year-date.