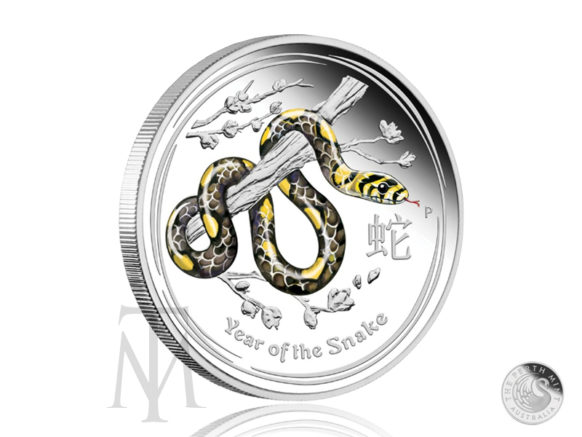 Celebrating the auspicious Year of the Snake, these spectacular 1/2oz and 1oz silver proof coloured coins represent the apex of our Lunar Series range.

Each coin is struck by The Perth Mint from 99.9% pure silver in proof quality.

Magnificent Year of the Snake Tributes

The reverse of each coin depicts a representation of a yellow and black snake curled around a tree branch.  The colour yellow is said to symbolise happiness and prosperity.  The Chinese character for ‘snake’ and the inscription ‘Year of the Snake’ also appear in the design with The Perth Mint’s traditional ‘P’ mintmark.

Issued as legal tender under the Australian Currency Act 1965, the Ian Rank-Broadley effigy of Her Majesty Queen Elizabeth II, the 2013 year-date and the monetary denomination are shown on the obverse of each coin.

Each coin is issued with a numbered Certificate of Authenticity and housed in a striking red and black display case with illustrated shipper.