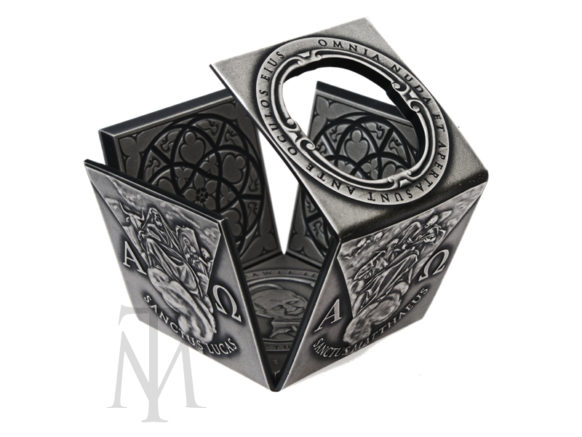 Described as being ‘cuboid’, it’s fundamentally an exploded cube with a portal on one face. It has a single obverse with the obligatory for Niue, portrait of Queen Elizabeth II, and a staggering 11 reverse sides, most with different art. Comprised of seven ounces of antique (oxidised) silver, only 555 pieces will be minted.

On the upper face of the coin is an image of John Paul II surrounded by a frame carrying a latin inscription: OMNIA NUDA ET APERTA SUNT ANTE OCULOS EIUS (Everything is disclosed and revealed before his eyes, Matthew 23:1-39). On the four outer faces of the coin are figures of the Four Evangelists, emblazoned with decorative elements.

The coins obverse sits on the underside of the coin and carrys Ian Rank Broadleys iconic portrait of Queen Elizabeth II. Surrounded by some ornate decoration and ‘wear’, it’s a refreshing take on on standard Commonwealth coin detail. Around the outside of the portrait are the inscriptions ELIZABETH II, NIUE ISLAND, 2014, and the face value of 25 DOLLARS, in this case of the New Zealand variety. In the lower corners are the coins purity (Ag 999) and the mint mark.